Africa World Airlines Bookings, or AWA for short, is a regional airline of Ghanaian origin based in Accra, Ghana. They have been touching African skies since September 2012 and continue to soar in success. AWA is the product of a joint venture between Hainan Airlines, China-Africa Development Fund, SSNIT and SAS Finance Group. 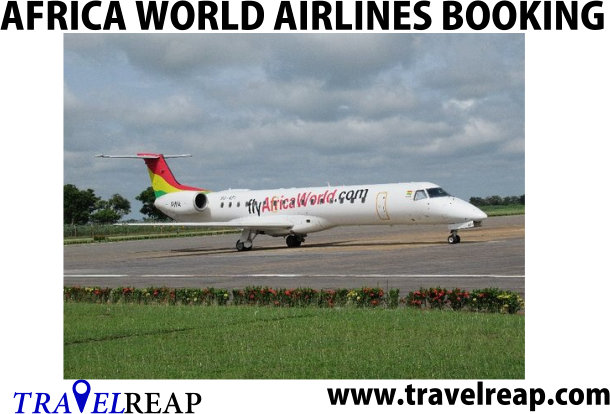 In July 2016, Africa World Airlines (AWA) was adjudged as the ‘Domestic Airline of the Year’ for 2015. This was held at the national Aviation Awards ceremnoy in Accra. This is the second time that the airline have won an award as they previously won the Domestic Airlines 2014 at the National Tourism Awards last year making it 2 times in a row.Africa World Airlines operates over 22 flights daily to 3 cities in Ghana and within Lagos-Nigeria.

Africa World Airlines allows one piece of cabin baggage and one personal item per passenger. All cabin bags must be able to fit in the overhead bin and weigh no more than 5kg. Passengers are advised to bring soft-sided baggage.

Premium and Value passengers are permitted two bags with a total weight of no more than 23kg. Checked baggage allowance for Premium (Business Class) and Value (Economy Class) passengers is two bags per passenger, not exceeding 23 kg depending on the load factor on a flight.

AWA currently only offers one way to check in, however implementation of online check-in is said to be coming soon. Over the counter check-in: AWA recommends you arrive at the airport at least 90 minutes, and not later than 30 minutes before a flight departs, with your passport or ID.

Africa world airlines are yet to offer online check-in on their flights.

The aircraft offer seating for up to 50 passengers. Economy seats are comfortable, designed for maximising comfort while reducing cost. Seat assignment will be conducted at the airport.

There are no meals served, however, complimentary hot beverages on some routes. This includes fresh fruits juice and a snack of croissants, biscuits and meat/fish pies are served on board.

On the Embraer 145 aircraft, port side seats, which are single row seats, will be allocated to Premium passengers.

Premium passengers who travel together will be assigned the first 2 rows of twin seats, and so forth.

AWA has, a for the most part, been servicing domestic routes within Ghana to 3 destinations in total. However, the airline has and is still expanding regionally opening up to Freetown, Sierra Leone

Scheduled flights are offered between the following destinations from Accra:

Get money off any Africa World Airlines flight when bookingwith PayPal and with our flight ticket voucher codes. Paying with PayPal is a safe and secure way for any airlineticket with Alternative Airlines.

Africa World Airlines is based at Kotoka International Airport which is the main airport that serves Accra, the capital of Ghana. Kotoka airportis the hub airport for Africa World Airlines, PassionAir Antrak Air,Arik Airand Starbow Airlines. Other airlines which fly to and from this airport include Air Burkina, Arik Air,Dana Air,Delta Air Lines, Ethiopian Airlines, KLM, Goldstar Airlines and Kenya Airways.

Log on to book cheap economy flight with AWA. All guests flying with Africa World Airlines are allowed one carry-on sized bag and a personal item, there might be an additional fee for extra bags. Premium guests enjoy priority check-in, one free checked bag, first-row seat, and priority boarding.

Africa World Airlines in review received an award from the Ghana Tourism Awards just two years after it began flight service. The Tourism Awards recognized Africa World Airlines as “Domestic Airline of the Year” and notes that even the President of Liberia has flown on AWA and for the fifth time in a row, AWA was awarded Domestic Airline of the Year 2017 at the 2nd National Aviation Awards Night.

Africa World Airlines(AW,Accra) is planning to addEMB-190equipment to its fleet during the course of 2018. Speaking to ch-aviation, the Ghanaian carrier’s Head of Commercial, Richard Kyereh, said a pair of theEmbraerRegional Jets would supplement its existing fleet of sixERJ-145LIs. Previously announced plans to addA319-100capacity are still valid he added without specifying timeframes.

AWA has been linked to Ghana’s ongoing national carrier project. Earlier this month, Minister of Aviation Cecelia Dapaah said the carrier was one of three operators currently in in-depth talks with government over the proposed new airline. Other contenders includeAir Mauritius(MK,Mauritius), with which Dappah signed a partnership agreement earlier this year, and the ever ubiquitous Ethiopian Airlines(ET,Addis Ababa).