ASKY Airlines is relatively a newcomer in the airline industry, but has found its niche in a much-needed service for Africa. ASKY stands for “African Sky” and prides itself on its ability to connect African countries through excellent service and quality.

The company was founded in 2008 and formed as a successor to Air Afrique. However, commercial passenger service did not commence right away. The Togolese airline launched operations in 2010 with a maiden flight from Lomé to Abidjan, and has since expanded its route to over 22 destinations.

Through its strategic and technical partnership with Ethiopian Airlines, ASKY Airlines is able to offer you more routes across more networks, connecting Africa with the rest of the world.

Popular flight routes with Asky Airlines are from Abuja to Dubai, Abuja to London, Lagos to Johannesburg and Lagos to Accra. 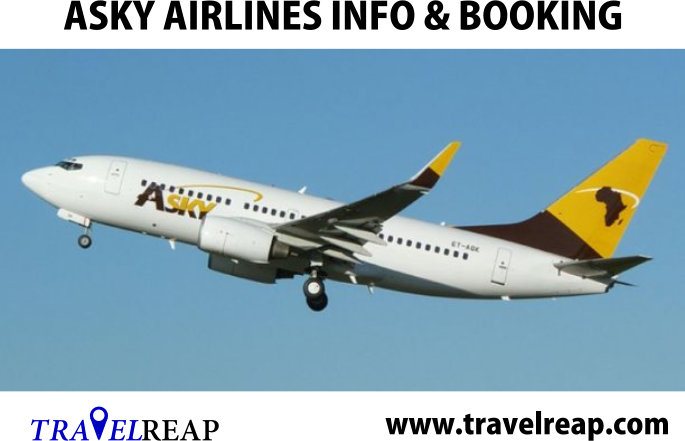 Founded in mid 2008, Asky Airlines (www.flyasky.com) is a passenger airline created through cooperation by a number of West African governments. The airline is headquartered in Lome, Togo, with its hub situated at Lome-Tokoin Airport.

Boasting a fleet of 8 aircraft, Asky flies to 23 destinations across West and Central Africa. Flying under the slogan “The Pan African Airline”, Asky effectively stepped in to the gap left when Air Afrique went bankrupt in 2002.

This airline’s demise made air travel in central Africa more difficult. After rigorous market research and feasibility studies being completed, Asky was initiated in late 2007, with its official launch in 2008. The airline is 80% owned by private investors, with public entities holding the remaining 20% share.

As of the beginning of 2017, Asky Airlines flies to 18 scheduled passenger destinations. These include Abijan in Cote d’ Ivoire, Monrovia in Liberia, Libreville in Gabon and Dakar and Cotonou in Senegal. Within Nigeria, the airline services Lagos and Abuja, having recently introduced non-stop flights to Accra, Abuja and Lagos. The airline also announced that it would start operating direct flights between Lagos and Johannesburg as of 8 April 2017.

Passengers will therefore be able to connect between Johannesburg and other African destinations, including Canakry, Douala, Niamey, Ougadougou and Yaounde.

In addition, the airline also flies to Accra in Ghana, Bamako in Mali, Bajul in Gambia, Beirut in Lebanon as well as Brazzaville in the Republic of the Congo.

ASKY Airlines covers a network of 22 destinations across 20 countries in Central and West Africa. It operates 174 flights a week to the following destinations:

By partnering with Ethiopian Airlines, their flight route extends from Lomé into Europe, South Africa, the Middle East, Canada and the United States

Find cheap ASKY Airlines flights using our booking portal at the top of this page. Remember you can combine flights with several airlines in one booking. This gives you the best chance of getting cheap flights and shortest overall journey time.

Book ASKY flights online using the flight booking tool at the top of this page.

To ensure safe and efficient air transport, ASKY Airlines made a strategic decision to only operate new or nearly new aircraft.

Its current fleet consists of:

ASKY has one of the most modern fleets in the West and Central Africa.

Checked baggage may not exceed dimensions of 90 x 53 cm.

Parents travelling with babies (under 2 years old) are allowed an additional 10 kg, as well as a collapsible stroller or car seat.

ASKY Airlines allows animals to be transported in the cargo hold or in the cabin, depending on the breed and size of the animal. The airline must be notified at least 48 hours in advance, should you wish to travel with your pets.

As of the beginning of 2017, ASKY Airline has a codesharing agreement in place with Ethiopian Airlines via Addis Ababa and into the Far East, East Africa and the Middle East.

Booking your own Asky flights from Lagos, Nigeria

Instantly compare flight prices for Asky and a host of other international airlines flying to Nigeria’s Lagos and Abuja using the above flight booking form, or for more information, visit www.flyasky.com – NOT www.askyairlines.com, www.flyaskyairlines.com or www.asky.com.ng.

The ASKY Airlines loyalty program is called the ASKY Club. There are 4 levels of membership are available with a range of benefits.

Benefits include things like a personalized service at ASKY agencies when booking, priority on waiting lists, assistance at the airport, 10kg baggage allowance, access to airport lounges on ASKY Hub, upgrading, award ticket, personalized luggage tag. To make an ASKY Airlines Booking use the flight search at the top of this page.

ASKY’s network currently covers 22 destinations in 20 countries of West and Central Africa.
ASKY operates approximately 210 flights a week on its network with an average of 40 000 passengers carried per month.

This network is built around its hub in Lome which is slowly becoming a regional hub. The Lome hub has the advantage of being positioned almost halfway between West Africa and Central Africa, enabling to be a perfect connection between the two regions.

Perhaps you were doing a Google search for ASKY Airlines Check In. As you may have noticed, the airline does not currently publish any links to online check in. You may be able to check in online if your booking is connected to it’s strategic partner, Ethiopian Airlines.

Check in with all your relevant documents or e-ticket at the ASKY airport counters. Business Class travellers have a dedicated check-in counter and priority boarding.

Due to some lengthy security checkpoint waiting times, earlier arrival to the departure airport is recommended. Passengers are advised to arrive at the airport 2 hours ahead of departure of Pan-African flights. Check-in closes 45 minutes prior to departure, except flights departing to Lagos, which close 1 hour before departure.

You can get in contact with ASKY Airlines with the following details:

A note about the airline website. You may google “ASKY Airlines Booking”.

30 Nov 2016  – ASKY Named Regional Carrier of the Year by the African Airlines Association (AFRAA) – Read the full article about the ASKY Airlines award.