List of Countries offering Visa Lottery – The visa lottery was established by the Immigration Act in the year 1990 in an attempt to bring individuals to the U.S. from other countries that had been sending few immigrants to the United States in the past few years.

As of recent, approximately 50,000 foreign nationals per year are granted visas based on the chance to come and live permanently in the United States of America under the visa lottery program. 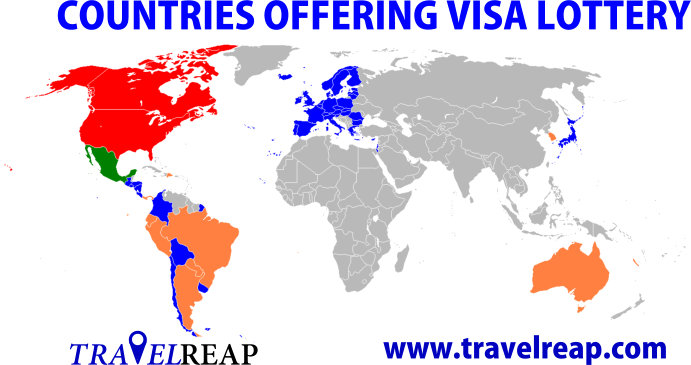 List of Countries offering Visa lotteries to Nigerians and Africans!

These are the list of countries offering Visa lottery but here are list of the few countries that do;

USA is part of the countries offering visa lottery to citizens of countries and they have stated their eligible countries already, they are all stated below:

The list below shows the countries whose natives are eligible for DV, grouped by geographic region. Dependent areas overseas are included within the region of the governing country.

The countries whose natives are not eligible for the DV program (because they are the principal source countries of Family-Sponsored and Employment- -countries) are noted after the respective regional lists.

What does the terms “native” mean?
Native ordinarily means someone born in a particular country, regardless of the individual’s current country of residence or nationality. Native can also mean someone who is entitled to be charged to a country other than the one in which he/she was born under the provisions of Section 202(b) of the Immigration and Nationality Act.

For Visa Lottery 2018 (DV Lottery), natives of the following countries are not eligible to apply, because more than 50,000 natives of these countries immigrated to the United States in the previous five years:

The Bahamas in North America, natives of Canada and Mexico are not eligible for this year’s Visa Lottery (DV Lottery) program.