South African Airways (SAA) is the national flag carrier of South Africa and services many domestic and international destinations from their hub at OR Tambo airport in Johannesburg. SAA has been a member of the prestigious Star Alliance group for over 10 years now. Together with their popular low-cost airline, Mango Airlines, South African Airways holds the first and second position for South Africa’s most on-time airlines.

SAA quite recently Introduced a Mobile Boarding Pass, which cuts your boarding time in half by allowing you to download your boarding pass, save it on your smartphone, and present it at the departure gate.

Fly SAA and dine like a king or queen as you taste cuisine prepared by South African celebrity chefs: Reuben Riffel and Benny Masekwameng. SAA also serves some of the finest South African wines on board.

Compare and book cheap flights with SAA to and from O.R. Tambo International Airport and popular flight routes from Lagos to Johannesburg. 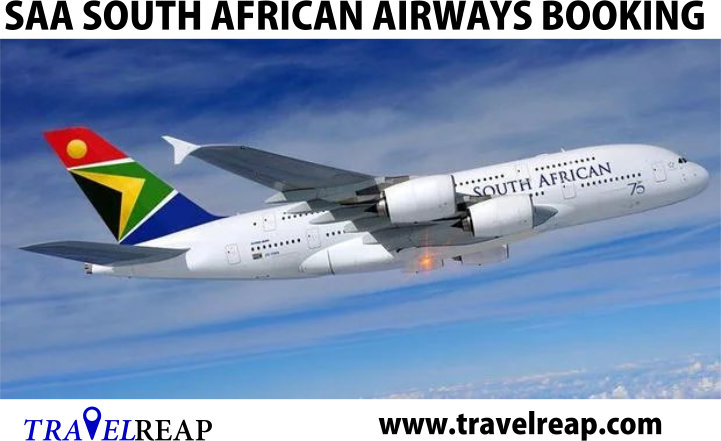 South African Airways has been a trusted passenger and cargo airline in South Africa for decades. It is the official flag-carrier for the country that stepped into the global arena for world-class carriers in 1934 when it took over from Union Airlines with a few modest ten-seater Junkers.

The history of SAA has not been without challenges. During apartheid, sanctions imposed by African countries prevented SAA aircraft from using their airports as stop-overs, so SAA (then known as “Suid-Afrikaanse Lugdiens” i.e. South African Air Service in the Afrikaans language) was forced to invest in aircraft that allowed them to bypass the continent altogether.

In 1997, three years after the dawn of democracy and liberation from the apartheid regime, SAA rebranded itself with a new name. Management positions have been shuffled over the years, but the current CEO is Mr Vuyani Jarana and the interim financial officer is Mr Robert Head. The parent company of this airline was Transnet until 2006.

Business Class: 2pc at 8kg each

It is expected that your carry-on baggage will fit under the seat or the overhead bin. Personal items like purses, overcoats and laptops are allowed.

Each class has a weight restriction and you may be charged more if you exceed the baggage limit stipulated for your cabin class.

Business Class: 2pc at 32kg each

Travelling with pets on SAA

With the exception of service dogs, pets cannot be carried in the passenger cabin on SAA flights.

The weight of the animal and its container will be charged as excess baggage. It is not accepted as part of free baggage allowance. It is the owner’s responsibility to ensure that the animals are properly crated and accompanied by valid health and vaccination certificates, entry permits and other documents required by countries of entry or transit.

If you wish to travel with your pets on SAA, please make the necessary arrangements with SAA’s Cargo department on 011 978 3366 before you fly.

Check-in for international flights need to be done 3 hours before departure, while flights to the USA have to be done 4 hours prior to departure.

Many people find it easier to book flights online for the simple reason that it is more convenient. You will find a flight booking tool at the top of this page.

To book SAA flights, simply select your dates of travel, the number of passengers and the departure and destination airports. Click ‘search’ to find the details, prices and duration of various flights.

Looking for a flight ticket from Nigeria to South Africa? You can book by selecting Lagos from the drop-down list that appears under ‘enter departure city’, and then selecting Johannesburg (or the specific destination you are flying to within South Africa) in the ‘enter arrival city’ box.

You can compare flight prices at the touch of a button, book your tickets and make a secure online payment on our user-friendly site.

SAA has code-share agreements with more than 20 airlines, such as:

With a track record of over 80 years as being one of the best and most reliable airlines in South Africa, SAA remains one of the leading airlines offering cheap flights to many popular destinations.

SAA offers business class and economy class cabins to suit travellers of different budgets. Business class benefits include a duvet and pillow and welcome pack, as well as a touchscreen monitor and audio/visual headset on demand.

SAA partners with SA Airlink and Mango to provide world-class travel experiences to over 40 destinations in South Africa, Africa and abroad. Its central hub is in Johannesburg, home to 47 state-of-the-art carriers.

The SAA route network has been growing since it’s early days, and now includes many destinations on 6 continents. SAA currently flies to more than 40 destinations spread around Asia, North America, South America, Africa, Europe and Australasia.

There are 14 popular destinations in South Africa including Cape Town, Durban, Bloemfontein and Richards Bay. Beyond the national borders, SAA lands at 18 different airports across Africa, in countries such as Accra, Dakar, Entebbe, Lagos and Harare.

International destinations include London, Hong Kong, Perth and Dubai to name but a few.

Looking for a flight to Nigeria from South Africa? Prices are competitive and vary according to where you are leaving from. Flights to Lagos from South Africa depart from various locations in all 9 provinces. These include Bloemfontein, Johannesburg, Durban, Cape Town, Kimberley, Mthatha, Nelspruit and Pietermaritzburg.

There is one SAA flight from Johannesburg to Lagos that departs on a daily basis. This flight (SA60) leaves O.R. Tambo airport at roughly 15:10 and has a duration of 6 hours 10 minutes.

Being the biggest city in South Africa with a rich historical and natural heritage, it’s no wonder that Johannesburg is one of the top destinations in South Africa.

Johannesburg is also an important layover destination for international flights to and from South Africa. It is one of the central business districts and tourist hubs attracting thousands of visitors worldwide.

O.R. Tambo International Airport is, therefore, the hub of South African Airways and is where the airline’s headquarters are based. You can look online to find cheap flights from your departure point to Johannesburg.

Nigeria’s growing economy draws interest from around the world, making it an up-and-coming competitor in the business world. It similarly attracts tourists from all walks of life, with a bustling city centre and one of the biggest and most diverse populations in Africa.

Flights from Lagos to South Africa

Flights to SA from Lagos

Flights to SA from Lagos land at many airports across the country. Flights direct from Nigeria to O. R. Tambo International airport in Johannesburg takes about 5 hours and 40 minutes.

Flight times to Cape Town International Airport range from 11 hours to 19 hours, including a stop-over in Johannesburg.

You can fly from Nigeria to Nairobi via South Africa.

Flights to King Shaka International airport in Durban range from 9 hours to 20 hours 30 minutes, depending on how long the layover in Johannesburg is.

SAA also provides flights from Lagos to smaller airports around South Africa, including Bloemfontein, East London and Kimberley (amongst others).